Here are some pictures I took recently while on a road trip in rural parts of north Texas. The landscape is flat but still beautiful, and the cactus flowers adds color to the ground. Judging from an unscientific survey of postings in the IBM developerWorks forums, and also in the Lotus/Domino related forums on LinkedIn, the adoption of IBM Notes and Domino seems to have increased dramatically in Asia during the last few years. The growth seems to be mainly in India, with China coming in at number two, while Notes jobs in the US seems to be dropping or being stagnant.

The indications that they are new or recent adopters are very strong. Many of the questions are very basic in their scope and it is obvious (and sometimes directly admitted) that a number of the posters are new to the Notes/Domino platform.

However, as many of the questions relates to older version of Notes/Domino (mostly 6.x and 7.x ), IBM should have a huge opportunity to Notes/Domino 9.0 on that market. It is slightly confusing why all these new adopters are on such old platform, but there might be some logic reason for that…

Also, there is a big interest on LinkedIn for certification, there are frequent requests for the answers to the certifications tests, mostly from people located in Asia. It also seems like IBM is pushing Notes harder in the Asian markets, as I even seen IBM employees in that region asking for the test answers.

A developer who does not know what replication conflicts are.

Note: I am sure this has absolutely nothing to do with US/European companies outsourcing development to those countries… 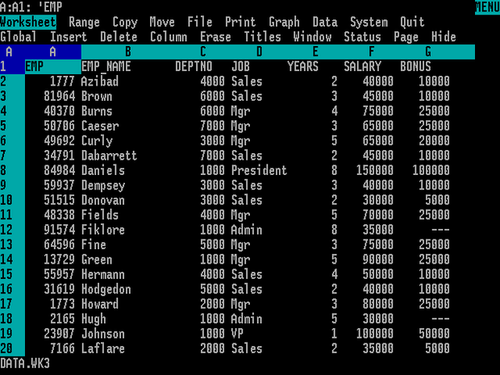 I personally never worked with 1-2-3 myself. When I started with computers in school, we used CP/M-86 as the operating system, and had a spreadsheet program developed specifically for use in the Swedish schools. My first job after high school was with Microsoft in 1988, so my first experience with a “real life” spreadsheet program was with Excel 2.0 (as well as with Multiplan for MS-DOS).

However, a few years later, in the early to mid 90’s, I worked as a journalist and reviewed a new version of Lotus Smartsuite. I remember how impressed I was with the infobox, and how I could have it up on the screen and change properties and see the changes at once, not having to reopen a dialog box over and over again to make a change, like you had to do in the program in Microsoft’s Office suite. Of course, we still see that behaviour in the infobox in IBM Notes. Another legacy of the product is the formula language used in IBM Notes, it originated as the macro language in Lotus 1-2-3.

Lotus 1-2-3 was a very important part of the early IT history, it was a major part of the PC revolution in the early 1980’s. But it was overtaken later the same decade by Excel, since Lotus did not jump on Windows quickly enough, allowing Microsoft to entrenching themselves on that market.

Preview for the teaser trailer, to be released on May 7.

You get to see about 10 seconds of movie footage here, and I have to say it looks pretty good.