IBM and HCL have promised to release Domino version 10 by the end of 2018. The other  week there was a joint webinar where some of the new features were discussed. If you missed this, there is a replay of it available. I will discuss some of the features in just a moment. But just look at the infographics below. There are so many new features already lined up.

The promise of Open IDEs means that we should be able to use more modern development tools. Hopefully the latest version of Eclipse, and maybe even Visual Code and/or Visual Studio. Those were frequently requested during the Domino 2025 jam. Support for OAuth authorization was also promised, as well as more REST APIs. Support for Loopback was mentioned. 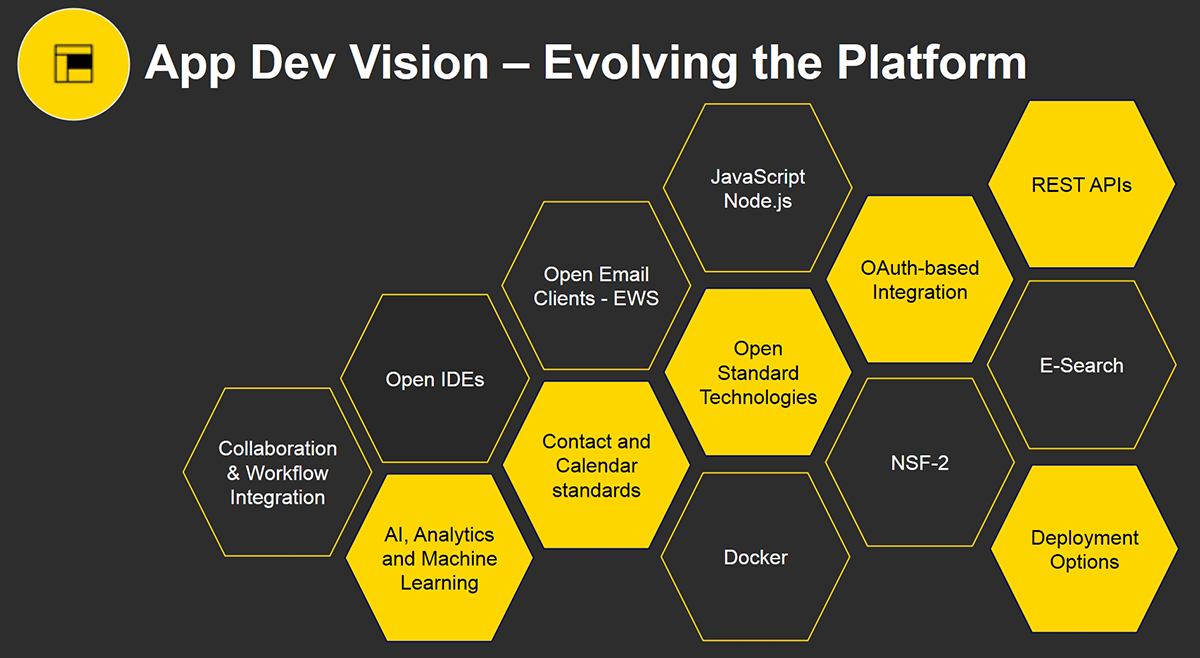 There were even demos, despite HCL only being 8 weeks into the development. Quite a few features had already been developed earlier, at IBM, but were not released for one or another reason.

For being less than a month before the big IBM Think conference, where you would expect some big news to be presented, HCL and IBM did not hold back. This makes me very excited about what all we will get to see in Las Vegas later this month.

So what all did we get to hear about and see last week? Let’s go directly to Domino. A new file format, called NSF-2 is being discussed, and we were promised an increase of the maximum file size from 64 GB to 256 GB per database. This is very welcome. DAOS has been a stopgap, helping when the database contains a large number of attachments. But when you have a very large number of documents, you previously had to split them into multiple databases.

While on the subject of a lot of documents, IBM is planning to overhaul the search as well, using elastic search (ES or E-Search as IBM calls it) to search even faster in large data sets. Even more support for running Domino in Docker containers is planned, including Docker Enterprise images. Domino running on Raspberry Pi?

For me as developer, the most exciting news is that Domino will support Node.js. HCL promised a full node.js implementation, so you can use the package manager npm within Domino. It also sounds like HCL is at least thinking about ways to implement support for Git. This is huge, and it will give Notes/Domino developers access to modern tools and functionality. But not only that, it will be easier for Domino customers to find expertise in the form of developers, as node.js is a very popular framework. In addition, Domino developers will learn new technologies, making them more attractive on the market.

During the Q&A session afterwards, the representatives for both IBM and HCL promised even more cool features to be presented at IBM Think in Las Vegas, coming up next week. Among what is to be presented is a brand new roadmap and a list of the features requested during the Domino 2025 jams earlier this year. I can’t wait to see what is in store for Domino.

There are several sessions covering Domino 10, and you can bet I will be in the audience! I hope to see you in Las Vegas next week.