Bose, well known for their noise-cancelling headsets and bluetooth/iPhone speakers in the SoundLink/SoundDock series, today presented a new series of multi-room audio products, which they intend to compete with Sonos Multi-Room Music System.

Today three products were released in time for the holiday season, with more products in the works for next year. I was able to play around with them for a little while, and I have to admit, they sound really good. This is the biggest of the three devices, a powered unit with a built-in subwoofer, giving it very nice bass. It connects to the home network and Internet through either wired ethernet or wifi. The price is $699.

This is a smaller version of the SoundTouch 30, identical except for removal of the subwoofer. The bass is surprisingly good, but naturally not as powerful as in its larger sibling. The benefits are the smaller size and a lower price at $399.

The baby in the family. As the name indicates, it is portable and the battery lasts for 5 hours, according to Bose. It also lacks wired ethernet. The size is slightly larger than the Bluetooth-equipped Bose SoundLink, to a price of $399.

All units have the same basic design, with six preset buttons on the top, which can be designated to different music sources, and an OLED display on the front showing status and listening mode, as well as artist and name of the song currently played. 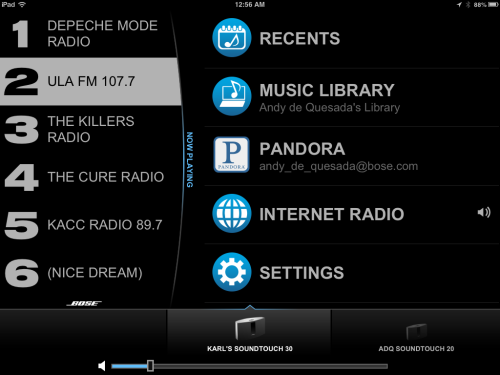 Initially SoundTouch support Pandora, Internet radio and music stored on your network or computers, using iTunes or Windows Media Player. On iOS devices, AirPlay can be used to stream music to the speakers as well. Support for Spotify, iHeartRadio and XM/Sirius is coming soon, according to Bose, with more music sources arriving in 2014. Each unit comes with a remote control, and also has an aux in port on the back, together with two USB ports (one micro-USB and one standard USB) used for the initial setup. There are apps for iOS and Android, as well as for OS X and Windows. The apps let the user control the different devices, and play either different songs on different speakers (for example in different rooms), or the same song on all units.

After comparing the three units side-by-side, my personal favourite is the SoundTouch 20. It hits the Goldilocks zone, with great sound to a substantially lower price that it’s larger sibling. The SoundTouch Portable is nice if portability is important, but the sound is thinner and not nearly as good. Since none of the SoundTouch models support Bluetooth, they do not really compete with the SoundLink or the recently released SoundLink Mini, both which are less expensive but lack most of the advanced functionality in the SoundTouch series.

7 thoughts on “Bose takes on Sonos with new SoundTouch series”