I visited Houston this weekend, and we decided to go to the Microsoft Store in The Galleria. The plan was to look at the Surface devices for a project I am currently working on (I will blog about this later this year, when we are closer to release). The thought was to take a look at the application on the web, before decided which device(s) to get for further testing. We also went to the Sony Store (pretty much next-door to Microsoft) to look at some laptops and to the Apple Store on the level above to check out their devices.

At Sony there was no problem looking at their laptops and other devices. They did not really have any tablets we were interested in, but we were still able to look at our application on their laptops, using Windows 8. Same thing at Apple, I accessed the application on an iPad Mini, no problem. Then we went to Microsoft, and I started playing with a Surface RT device. Nice small form factor and, and surprisingly nice keyboard. I entered the URL for my server and expected the login prompt to show up. Instead I was redirected to the Microsoft Store webpage. OK, perhaps I had typed something wrong in the URL. I tried one more time, making sure the address was correct. Same result. We then asked a girl working in the store what was wrong. She explained that most pages are blocked, only a small number of commonly accessed pages were avaliable to surf to. That was supposedly because people went to “inappropriate pages”.

So obviously Microsoft don’t have access to the blocking technology that most companies (including the one I work at) use to block online gaming, adult sites or other categories deemed not appropriate for work. Why even have a store, when Best Buy or similar places is a much better place to actually test the device? Total fail by Microsoft.

“Do again, do right”, as my instructors in the Swedish Army would have said.

Note: The picture was taken with my Samsung Galaxy S4, using the camera mode to erase moving objects. At least 3 people walked in front of me while I took the picture, but as you can see, the phone did a good job at erasing them! 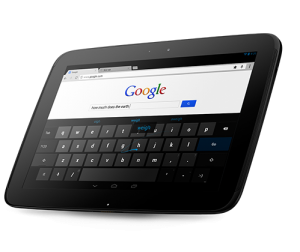 Google cancelled the official launch of the Google Nexus 10 tablet in New York last week due to Sandy, but here is the information about the new tablet: