This weekend I got hold of Google’s latest gadget, Chromecast. As you may know, it is a small device, the size or a large thumbdrive, but with an HDMI connector instead of a USB connector.

It allows you to stream video (currently from Youtube, Netflix and Google Play) to a TV, as well as mirror the screen of the Chrome browser on the TV. In the box, you get the device, a USB wall charger, a mini-USB cable and a short HDMI extension cable. 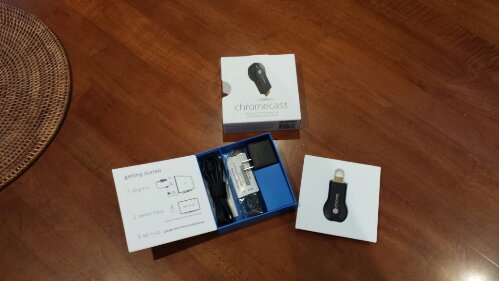 The installation is extremely simple. First of all, you need a wireless network, and a device running Android, iOS  or the a Windows/Mac computer running the Chrome browser.
Plug the Chromecast device into an available HDMI-port on the TV, connect the mini-USB power adapter and plug it into an outlet. Power on the TV, and you are directed to download the app to your smartphone/tablet or a small program to your computer. On the computer you also download an extension to the Chrome browser that let you mirror the screen on the TV.

I downloaded the Android version of the app on my Samsung Galaxy S4, and it found the Chromecast device at once. I connected to the device, and was now able to start playing videos. The total time to hook everything up, installing the software and connecting my phone to it took no more than 3 minutes. 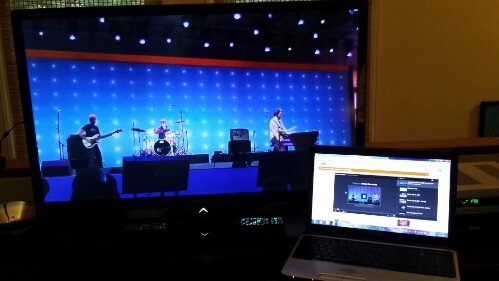 After playing a couple of Youtube videos and starting a movie on Netflix, I decided to test the screen mirroring. The browser extension simply adds a small icon in the browser, and when I click it, the contents of the browser (excluding the title bar, menus, status bar, etc) are displayed on the TV. 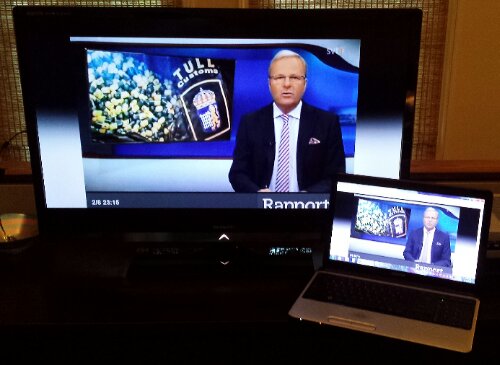 I tested some streaming video from Swedish TV, watching a news show. It worked perfectly, but there was a delay of between 2 and 3 seconds between the computer and the TV.

The sounds comes out of the TV speakers, and during my testing the sound and picture quality was good. I was not performing the test on my network at home, and because of a sometimes weak signal, one of the Youtube videos had to buffer a bit.

The Chromecast device works by running an embedded version of Chrome OS, which in turn is based on Linux. It then stream videos to the TV directly from the source. Netflix, Youtube and Google Play all have software in the device to handle their streaming content. The laptop, tablet or phone is just a remote control, starting/stopping/pausing the video (or in the case of Netflix, going back 10 seconds if you missed something). I am guessing that the screen mirroring works the same. I would imagine that the browser plugin is just sending commands to the embedded Chrome browser in the device, duplicating what happens on the screen.

So what is my verdict? Well, for $35, it is a great little gadget. For me personally it is perfect, I can now watch TV shows from Sweden even while in the US, without having to hook up a computer to the TV. I can use a laptop or smart phone as a remote. I have not been able to get Chrome on Android to mirror it’s screen, but I can see apps and hacks for Chromecast coming out very soon. 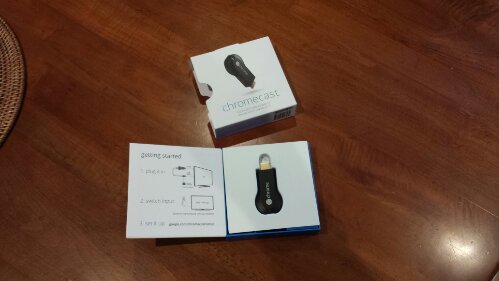 If you already have Youtube and Netflix in your TV or blu-ray player, then Chromecast might not be as interesting. But if you want to use the screen mirroring, it is great. That function would also be very good for presentations on a big screen TV. In short, a very cool and fun gadget, to a very reasonable price. It is not threatening Apple TV or Roku yet, but is a nice low-cost alternative.

Currently it is very hard to get hold of a Chromecast, they sold out within hours of becoming available. A big thanks to Chrissy Hull, who let me test the one she got, making this review possible.

« Today I became the father of a teenager
Microsoft Store – #fail »