This morning, IBM presented the latest version of Notes and Domino. The new product name is IBM Notes 9.0 Social Edition. As you notice, the Lotus name is now gone, and the look is changed to look more like other IBM applications, with a more modern design. There are also changes and updates to the user interface inside the different parts of the client. 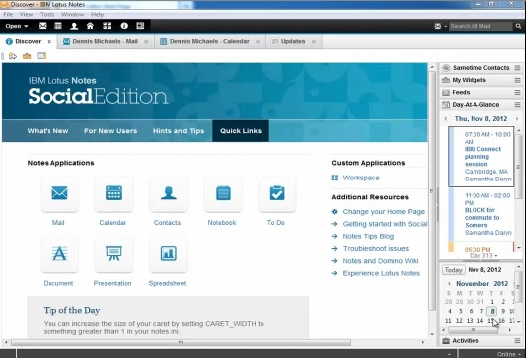 One thing, totally new for Notes, is that tutorials and training videos are available in the client.  The tutorials are not just for new functions, but also older tips and tricks that will make the users more productive.

During the presentation, new functions in mail and calendar were demonstrated. One function that will surely be popular with users is to group mail by date: 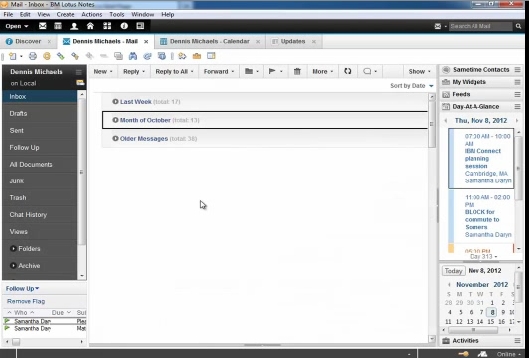 Other new features shown were the ability to color code different categories of meetings using custom colors and improved monthly view, as well as a weekly planner taken from Organizer.

The activity stream is using the OpenSocial standard, and Domino is now supporting OAuth and SAML for authentication. Customers can however deploy Notes 9.0 without the Social Edition functions, and add them later.

Not only has the traditional Notes client been updated, iNotes is also updated to look even more like the rich client. One of the biggest news in this version is the Notes browser plugin, that allow user to run traditional Notes applications directly in the browser, in full fidelity with no Notes client installed. The new version of iNotes also contains the new activity stream, as shown in the image below. 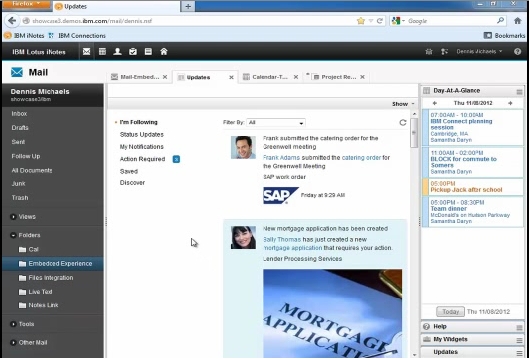 The new version of Traveler will (in addition to iPhone and Android) also support the Blackberry 10 platform and Windows Phone 7.5/8, and now also be available for IBM iSeries.

A public beta version of Notes 9.0 Social Edition will be available December 14. For previous versions of Notes, since (if I remeber correctly Notes 5), IBM have been doing managed beta testing and not released public beta version.
The final version is planned for Q1 2013. IBM also outlined the future roadmap for the next couple of years, which included a new major realease in 2015: