According to an article in Aviation Week, Boeing is planning to team up with Swedish airplane manufacturer Saab to offer a new two-seater training version of the JAS 39 Gripen fighter to the US Air Force. The old Northrop T-38 is being retired, and a new trainer is needed in the future.
Approximate 350 trainers are needed, but in addition the fighter could be useful for aggressor training (e.g Red Flag and Top Gun), currently flying mostly F-15 and F-16 fighters.

Another use for the two-seater JAS 39F model would be as a companion trainer for the F-22 Raptor and F-35 Joint Strike Fighter, neither of which are being produced in a two-seat version. Currently T-38 is used in this position as well.

A source in the USAF quoted in the Aviation Week article hints that the step is not very far to use an affordable air defense fighter to replace the aging Air National Guard F-15/F-16 fighters. 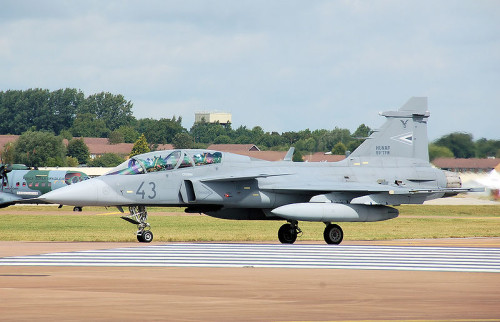 JAS 39 have been produced in four different variants. JAS 39A and B were the initial version that entered service in 1996. Some of them have been updated to the new C/D models, and additional JAS 39C/D have been delivered to countries like Hungary, South Africa, Thailand and Czech Republic.

Switzerland is intending to buy the new JAS 39E single-seat model, after a referendum in 2014. Sweden is also planing to upgrade to that model when it becomes available.

The F model Boeing is intending to offer the US Air Force is a brand new development, possibly with some functionality not needed in a trainer removed to save cost.

« Class for Domino Directory lookups
25 years in the IT industry »