Stuart McIntyre just posted a blog entry that I think everyone should read. He is actually in turn re-posting a blog entry by Single Dad Laughing, who has given permission to repost it. So I will simply copy the full blog post below. It is fairly long, but I hope everyone that read this blog will read the full text. It really made me think, and I also recognize me in several sections. I am sure the same will happen to you. 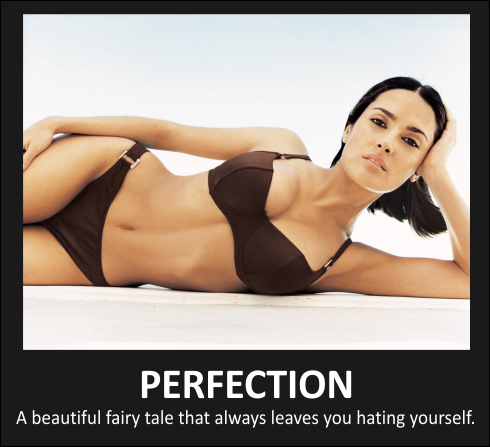 As a warning, the following post was written in complete desperation. I have recently learned some very sobering truths from people that I love dearly.

These truths have set in motion a quest within me to do whatever I can to make a change. Today is not geared at funny. Today is geared at something greater. Read it to the very end. I promise you will be affected in a way you have always needed to be. I spent more than twelve hours writing this post because its message is that important to me.

I wonder. Am I the only one aware that there is an infectious mental disease laying siege on us right now? There is a serious pandemic of "Perfection" spreading, and it needs to stop. Hear me out because this is something for which I am passionately and constantly hurting. It’s a sickness that I’ve been trying to put into words for years without much success. It’s a sickness that I have personally struggled with. It’s a sickness that at times has left me hiding in dark corners and hating myself.

And chances are it’s hit you too.

What is the disease called "Perfection"? Perhaps a list of its real-life symptoms will help you better understand it. We live in communities where people feel unconquerable amounts of pressure to always appear perfectly happy, perfectly functional, and perfectly figured. "Perfection" is much different than perfectionism. The following examples of "Perfection" are all real examples that I have collected from experiences in my own life, from confidential sources, or from my circle of loved ones and friends. If you actually stop to think about some of these, you will cry as I did while writing it. If you don’t, maybe you’re infected with way too much of this "Perfection" infection.

"Perfection" is a wife who feels trapped in a marriage to a lazy, angry, small man, but at soccer practice tells the other wives how wonderful her husband always is. "Perfection" keeps people from telling the truth, even to themselves. My husband is adorable. He called me a whore this week because I smiled at a stranger. When I started crying, he said he had a game to go watch. I love him so much.

"Perfection" is a husband who is belittled, unappreciated, and abused by his wife, yet works endlessly to make his marriage appear incredible to those around him. "Perfection" really does keep people from being real about the truth. You would have laughed, guys. She said that I suck at my job and will never go anywhere in life. Then she insinuated that I was a fat, rotting pile of crap. Isn’t she the best?

"Perfection" is a daughter with an eating disorder that keeps it hidden for years because she doesn’t want to be the first among her family and friends to be imperfect. She would give anything to confront it, but she can’t because then the "Perfect" people would hate her as much as she hates herself for it.
"Perfection" is when a son has a forbidden addiction, and despises himself for it. "Perfection" makes us believe that nobody else could understand what it is like to be weak and fall prey to the pressures of the world.

"Perfection" is a man who loathes himself for feeling unwanted attraction toward other men.

"Perfection" is a couple drowning in debt, but who still agree to that cruise with their friends because the words "we don’t have the money" are impossible ones to push across their lips.

"Perfection" is a mom hating herself because she only sees that every other mom around her is the perfect mother, the perfect wife, and the perfect neighbor. I’d give anything to be Mrs. Jones. Today she ran 34 miles, cooked six complete meals, participated in a two-hour activity with each of her seven children, hosted a marriage class with her husband, and still had time to show up for Bunco. What this mom doesn’t know is that Mrs. Jones is also at home crying right now because the pressure to be "Perfect" never lets up.

"Perfection" is a dad hating himself because he can’t give the same thing to his kids that other dads do, and then hates himself further because he takes his self-loathing out on his kids behind closed doors. You know what would have been nice? If you were never born. Do you realize how much money I’d have right now? Now come give Daddy a hug because I can force you to give me validation.

"Perfection" is a child hating herself because the boys at school call her fat, and when she goes home she tells her mom that school was fine. Her mom never stops to question why her daughter doesn’t have any friends, becaue her mom doesn’t want to think that anything might be less than "Perfect".

"Perfection" is a man feeling like a smaller man because his neighbor just pulled in with a new boat.

"Perfection" is a woman who is so overwhelmed that she thinks about killing herself daily. "Perfection" makes it so that she never will because of the things people will think if she does. How could I make my suicide look like an accident? If I kill myself, I don’t want anybody knowing that I ever had any problems. She never stops to look at why she wants to do it, because healing means admitting imperfection.

"Perfection" is a man who everybody heralds as perfect, and inside he is screaming to be seen as the faulty human being that he always has been. Because to no longer be "the perfect one", that would be freeing.

"Perfection" is a woman having an affair because she’s too afraid to confront the imperfection in her marriage.

Stop, and read that one again.
There is a twelve-year-old boy buried 20 miles from where I sit because the "Perfection" that has infected the people around him infected him to the point that he deemed his own life worthless. "Perfection" pushed him to take his own life over something most of us would consider negligible in the life of any teenage boy.

"Perfection" is my friend’s cousin swallowing hundreds of pills because she just got the news that she was pregnant, out of wedlock, and the shame was too much to bear. She was only attempting to cause a miscarriage. 24 hours later, she closed her eyes and never opened them again. She is dead because of the "
Perfection" infecting those around her. We’d rather you die than shame this family. Thanks for taking care of that, honey. By the way, we’ll do the right thing and make ourselves out to be the victims now. We have to. We’re infected with "Perfection".

I could go on. This is all a small sampling of the disease called "Perfection". You have brothers, sisters, mothers, fathers, extended family members, neighbors, friends, and children who are ALL these things, yet none of us will ever know. "Perfection" is a hideous monster with a really beautiful face. And chances are you’re infected. The good news is, there is a cure.

Why didn’t somebody, anybody, put their arm around that 12-year old boy and let him know that they loved him and would always love him? What was he being told and taught that he would end his own life over something that almost no teenager can control? Maybe that beautiful and wonderful boy would still be alive if even one person had broken down the "Perfection" that completely controlled all those in his life from whom he desperately craved validation.
Why didn’t somebody, anybody, tell a beautiful pregnant girl that there was nothing so big in life that it couldn’t be made right. Maybe that incredible young woman would still be alive. Maybe her now one-year-old child would be learning to walk or say "Mommy" right now. Maybe.

The cure is so simple.

I am not perfect, nor do I want anybody to think of me as such. Here’s my dose of real:
I once stole a box of money that was meant for a child with cancer. There was more than $150 inside. That was 12 years ago, and I still hate the person in me that did that.
I believe in God, but not religion. It took me 30 years to find the courage to say that. It took me 30 years to believe that I could be a good man and still believe that.
I once got so angry at my wife that I hit the wall. The dent is still there, haunting me every time I see it because I never thought that was something I would do.
I once sat in my bedroom crying uncontrollably because I felt like everybody thought I was fat and ugly. I was a full grown man.
There are some people I avoid bumping into in public because I feel like I’m not as good as them.
I judge people harshly who share the same features that I hate about myself.

"Perfection" infects every corner of society. It infects our schools. It infects neighborhoods. It infects our workplaces. This is not to say that there aren’t a lot of genuinely, happy people. I am one of those people. Most of the time. There is nothing more beautiful than a person finding true happiness in who they are and what they believe. No, this is not me trying to diminish the happiness in others. This is merely me pathetically attempting to put a face on a problem that I see everywhere but few people ever notice.

This is me, weeping as I write, asking the good people of the world to find somebody to put their arm around and be "real". This is me, wishing that people would realize how beautiful they are, even with all of their imperfections. This is me, sad and desperate for the girls in this world to love themselves. This is me, a very imperfect man, trying to help others feel a little more perfect by asking you to act a little less perfect.

Will you help me spread "Real"? Tell us below just how perfect you aren’t. You never know who might be alive tomorrow because you were real today. You never know who needs to feel like they aren’t alone in their inability to be perfect. Even if you comment as an anonymous guest, please comment. Tell us what you struggle with. Tell a sad or dark secret. Get vulnerable. Get real. Let’s see if we can get 1,000 people showing the world that we’re not defined by perfection.

And if you like, share this post. If you want the people around you to start being real, you have to be real first. If it’s your first time here, we’d love to have you follow us. I promise it’s not always this intense (or nearly this long). I’ll post something really funny tomorrow.