I love using the free icon set Font Awesome in my web applications, and I know I am not alone. A new major version is in the works, and the creators are using Kickstarter to help fund it. Font Awesome version 5 will still be free, but as an early backer you get the Pro versions, with over a thousand extra icons, and much more. And the price? Only $20 until the end of the Kickstarter tomorrow Monday at Noon Eastern time. After this the Pro version will be $40 and each of the currently 18 icon packs (each with 30 icons) will be $10. So this is a substantial savings.

The new version should be available in May 2017 but as we all know, plans can always change. You can read more about the Kickstarter campaign or take a look at what you get in Font Awesome 4.7. If you are doing any kind of web development and not already using it, you should take a closer look at Font Awesome.

It is probably well-known that I am a little bit of an enthusiast when it comes to HP calculators. I have written about this in the past here on my blog.

The other day I received a packet from Switzerland. Inside I found two calculators from SwissMicros. This is a company who created and sell clones of the famous HP Voyager series (HP-11C, HP-12C, HP-15C and HP-16C) as well as a version to emulate HP-41.

I received one full-size DM-15L (which was introduced just last year) as well as the original credit card sized DM-15. I picked this model as I still have my original HP-15C that I got in 1983 so I could compare them side-by-side.

SwissMicros have made an amazing job. I have just started playing with them, but they work just like the original. 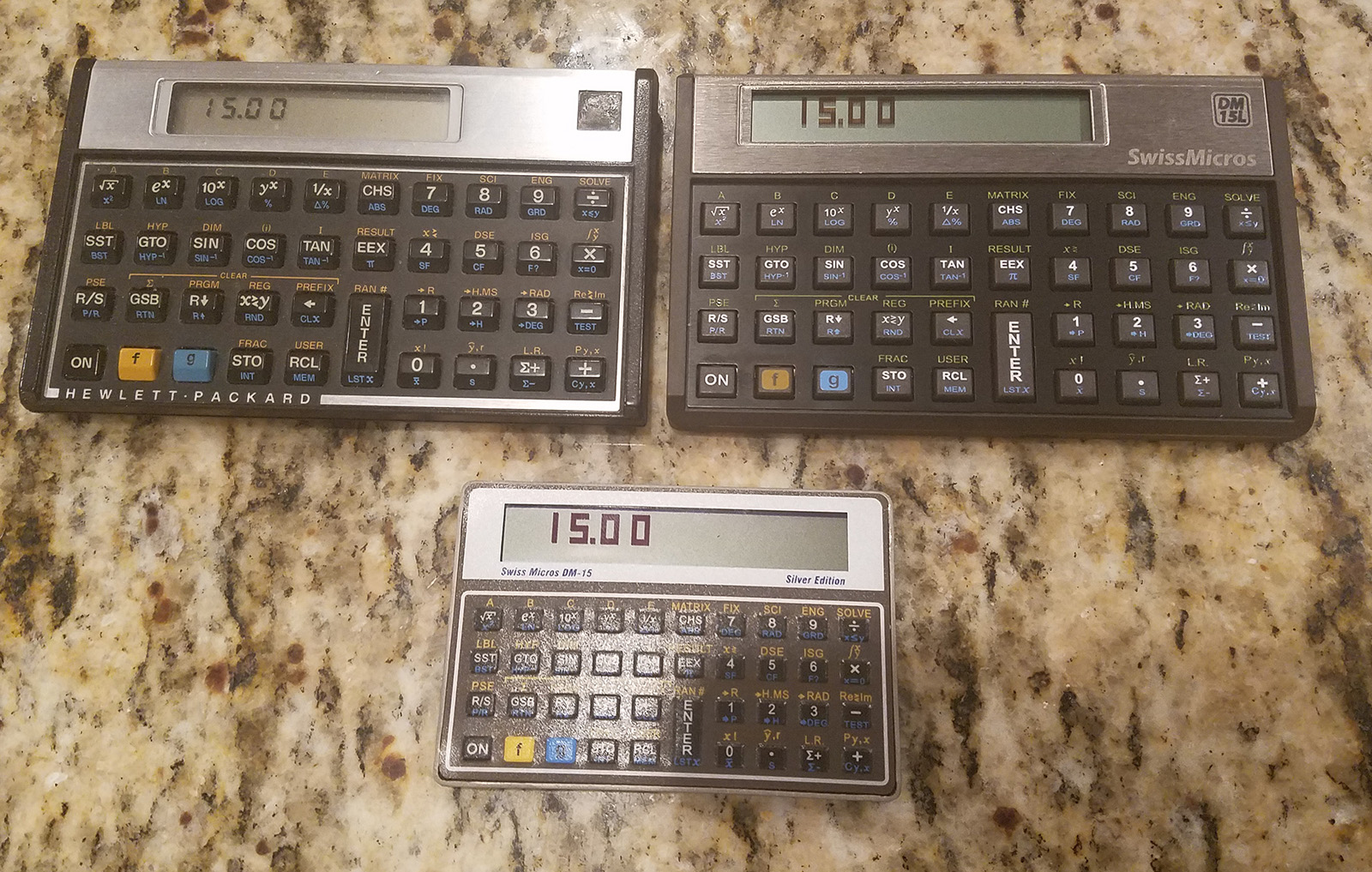 The attention to detail is pretty amazing. On the back of the larger DM-15L there is even the same set of formulas, functions and error messages as on the original. There are of course some differences. The case is not plastic but titanium, and held together by four screws. The keys are flatter that on the classic HP keyboard, but the feel of the keyboard is almost identical, something that really impressed me. On the credit card sized DM-15 the keys are almost totally flat, but still easy to use despite the small size.

There is also a USB port to allow users to connect to the computer to update the firmware or even access the content, something that did not exist back when the orignal calculators were introduced in the early 1980’s. SwissMicros also claim to have fixed some of the bugs found in the original calculators. There is also more memory available by using a special firmware. The fact that you can upgrade the firmware is very nice. These days we are used to that, but back in the 80’s that was unheard of.

Another neat feature is that there are 3 different fonts to choose from. The original of course only had one font. The letters on the display are a little bit larger than the original, making them easy to read. The calculators also run at a much higher speed than the original at 48 MHz, but the speed can be slowed down to 12 MHz with a special key kombination. The batteries used are CR2032 instead of three button cells of the original. The 2011 HP-15C Limited Edition used two CR2032 batteries. You have to open the case (remove the four screws) of the SwissMicros calculators to replace the battery, instead of just popping of a small plastic door. I think it’s a good improvement as that little door was prone to get lost.

The price is a bargain if you compare with eBay, where the originals often ar sold for $300-400 or even more. The full-size L-models are all 119 CHF (Swiss Francs) and the credit card sized models are 89 CHF. The DM-41 models are each 10 CHF more. This translates to almost exactly the same price in US dollar as I write this.

So what is my verdict? I am pleasantly surprised. Both models are very nice and the quality of engineering is what one would expect from Switzerland.  The case of both model feels really nice, and thanks to the titanium they seem almost indestructable. I would not be worried keeping any of them in my pocket for daily use.

The full size models come with a black case very similar to the original one. For the credit card models there are cases available for ordering separately.

Is it worth $90 or $120 to own them? Absolutely. I still use my HP-15C almost daily, and not having to worry about losing it or having it damaged is worth a lot. Or perhaps you got rid or lost your original calculator and feel nostalgic and want to once more experience what many call the best calculator ever made. Yes, it is not the original HP, but it is pretty close and to an acceptable cost. And the credit card sized models are pretty amazing, showing how far we have come in 30 years.

Disclaimer: I got the calculators for review from SwissMicro after they contacted me and offered to send me two samples. If I would have known about them earlier I would probably have purchased at least one.

IBM has opened the nominations for IBM Champions for 2017. This is how they describe the program:

The IBM Champion program recognizes innovative thought leaders in the technical community and rewards these contributors by amplifying their voice and increasing their sphere of influence. An IBM Champion is an IT professional, business leader, developer, or educator who influences and mentors others to help them make best use of IBM software, solutions, and services.

So if you know someone who have helped you or who deserve to be honored for their committment, go and nominate her or him! I have a list of people I plan to nominate myself.