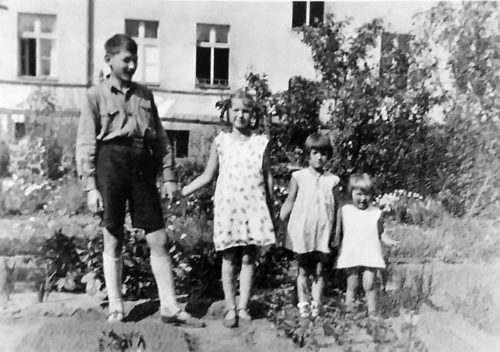 Karl-Heinz, Marie-Luise, Anneliese and Katja in 1934 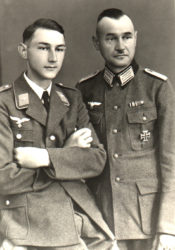 Following Germany’s defeat in World War I, the Versailles Treat forbid Germany from having an Air Force. After Adolf Hitler came to power in 1933, Germany started training pilots in secret. In addition, a program started to prepare young men for future pilot training, by using gliders and sail planes.
My uncle started flying in 1936 or 1937, probably through the German Air Sports Association (Deutscher Luftsportverband, or DLV e. V.), an organization set up by the Nazi Party in March 1933 to establish training of military pilots. I was told he once flew over the market in the center of Lauenburg, where the family now was living, with a sail plane, which caused some complaints from the city and an earful from his mother. He was probably lucky that his father was already in the Wehrmacht (Army) at this time, and not at home. 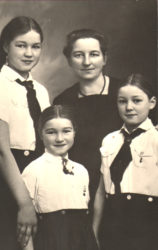 In addition to enjoying flying, Karl-Heinz was also a gifted musician. He played violin, piano, organ and trombone. He was, however, not allowed to practice the trombone at home, due to complaints from the neighbors. When I was a child my mother spoke about the time when he played as a member of a band on a cruise ship. The Nazi dignitaries on this cruise were served the best food, and the band was allowed to eat the same food. According to my mother, her brother hollowed out the breakfast rolls (“Brötchen” in German) and feed the innards to the seagulls. Then he filled the cavity in the bread with butter and enjoyed his self-made delicacy. To him the butter was the luxury and he took full advantage.

In September 1939 Karl-Heinz had just passed his entrance exams for the university (“abitur”) when WW2 broke out. He volunteered for the Luftwaffe (Air Force), however, he was rejected at first for being “too tall”. A month later the decision was reversed and he received order to join the Luftwaffe.

Karl-Heinz flew Fieseler Fi-156 “Storch”, a light forward observation and medical evacuation aircraft, as well as Junkers Ju-52 transporters. Using the Ju-52, he took part in the Battle of Stalingrad, attempting to supply the German 6th Army with food and other supplies after it was cut off and surrounded, as well as evacuation of wounded soldiers out of the city.

He served as Unteroffizier, an NCO (Non-commissioned Officer) rank that is most similar to Sergeant (OR-5). He was acting as a squadron leader (“Staffelkapitän“), a position which normally is held by a major. Incidentally his father, who was a lieutenant by the end of WW1, ended up with the rank of major during WW2.

Towards the end of the war, Germany was lacking both aircrafts and fuel for them. Karl-Heinz was assigned to an anti-aircraft artillery regiment, in German called Flak (from Flugabwehrkanone).  In Germany during WW2 both anti-aircraft artillery and airborne troops belonged to the Air Force, not the Army as in most other countries.

I am not an expert on German WW2 organizational charts. Normally the numbering is from right to left. I was once told that the 6th battery is most probably the symbol all the way to the right, which indicates a towed battery equipped with the German 8.8cm anti-aircraft gun. It was probably towed by a half-track, e.g. Sd.Kfz. 7, or possibly a truck. (video)

However, if you count the batteries from right to left, he would been in the left-most battery under 1st battalion, which is a Flakvierling, four 2cm auto-cannons combined into one unit. (video)

In the beginning of 1945 Karl-Heinz was in East Prussia fighting the advancing Red Army. The 88mm anti-aircraft gun was not only used against aircrafts, it had been found to be efficient against armored vehicles and tanks as well, so he was serving in an anti-tank role.

German units were encircled in the Heiligenbeil Pocket or Heiligenbeil Cauldron (German: Heiligenbeiler Kessel), after they were denied their requests to retreat. Zinten (now known as Kornewo, Kaliningrad Oblast) was the scene of bloody battles. Both sides paid a heavy price in terms of casualties. Karl-Heinz Groeling was one of those casualties. He was wounded on February 23, 1945, shot through the left lung. He was moved to a field hospital, then a hospital ship and finally to a hospital in German-occupied Denmark, where he arrived on March 10. 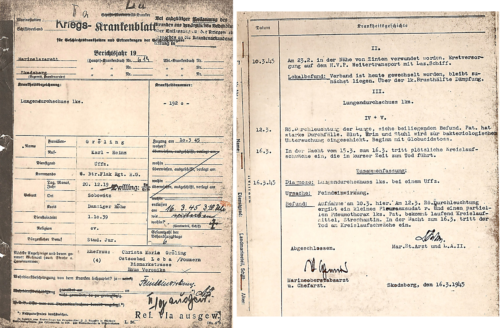 In the early hours of March 16, 1945, at 3.10am, Karl-Heinz Groeling passed away, just 25 years old. He is buried at the beautiful Vestre Kirkegård in Copenhagen. My parents named me after my uncle, something I consider an honor.