But something happened. IBM decided to do another IBM Connect in 2016, this time at a new location in Orlando, the Hilton. And people came. I have heard a number of about 2,200 attendees. Yes, just a fraction of what it was at it’s pinnacle, with 10,000+ attendees. But still more than previous years.

The hotel and conference area was great. You still had to walk between conference rooms like in the Swolphin but you did at least not have to run over to another hotel. The dining tents reminded me of the first 10+ years of Lotusphere, but the food was a notch or two above when we were used to at Swolphin. And it was great to be able to sit outside and eat if I wanted to. Pete Janzen and Martin Donnelly, both from IBM

The conference was great. There is always room for improvements, but in general the conference team had done a great job. The scheduling was better than in many years, I was able to attend a number of great sessions and I even liked the new simpler badges. The check-in process was automated, and I used a combination of the conference app and the printed conference paper to find my session. I actually liked that, even if I did miss the convenient little agenda booklet one kept in the badge holder.

I also did my first presentation at IBM Connect this year, a 20 minute Lightning Talk in the Expo Showcase Theatre. This was a bit of a challenge, as I had all the exhibitors right there, and the noise from everybody talking to the vendors made the presentation more difficult, both for the presenters and the audience. I hope that everyone that attended (thank you!) got something out of it.

IBM Champions got a lot of exposure 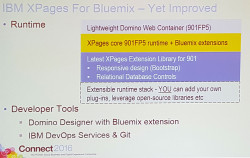 When it came to the sessions, I noticed a theme. For the last 4-5 years we have seen a massive number of sessions geared towards XPages. This year the big theme was Bluemix and integration between different services, including XPages. This is where the broad portfoilio of IBM really is beneficial, you can connect different systems with each other. Using Bluemix you can connect XPages to a SQL database or a Domino NoSQL-databas, you can throw in Angular.js or even cool new technologies like Node-Red and then use services from Watson to process your data. A year ago I felt a bit “meh” when it came to Bluemix, but after Connect 2016 I really want to sit down and start playing around with it and see what cool stuff I can do.

The Opening General Session (OGS) was split into two separate parts. It was not until after the 45 minute break we got to see demos and learn more about future plans from IBM. But there were no customer panels and the customer presentations were short, to the point and relevant. I actually really liked this format. Good job, IBM!

Lets talk a little about the vendor showcase. In 2014 the exhibit hall in Dolphin was way too big, and in 2015 it was moved to a very small and cramped room in Swan. This year IBM got it right. I was able to visit most of the vendors, and there was plenty of space to mingle with people as well as during the coffee breaks that took place in the Expo Showcase.

So what are my suggestions for IBM Connect 2017, if IBM decides to do it again? Stay at Hilton, it was a very good location. Move the Lightning Talks to some place where it is less noisy and distracting. Update the badge holders with a pocket for business cards and perhaps even bring back the pocket agenda. Bring back the longer 2 hour jumpstart/master classes on Sunday. Otherwise I am very satisfied with how Connect 2016 turned out!